From Broken Neck To Broken Record In 9 Months

We love to share stories from time-to-time.  People overcoming major hurdles, big accomplishments and in this case overcoming a major injury.  Robert Marchinko came blazing across the finish line to win the Oak Island Marathon on February 16th, 2021 with a winning time of 2:31:39; setting a new 45-49 age group record in North Carolina ..but you never would have known he broke is neck in several places just 9 months before the race.

Here’s a short interview with Robert:

How many miles per week do you train?
I averaged 65/week for this race

Is the marathon your favorite distance or do you prefer another?
Yes, no question, I like that you are not only competing against other athletes, but also the distance as well.

Tell me a little about your running history?
I am from originally, from Ohio, but have lived-in NC for 21 years, I did run in college at both Cleveland State and Kent State University, I was lucky enough to be All Conference at both schools in 10k and won a Conference Title in Cross Country at CSU. Currently a Elementary PE Teacher in Salisbury, NC and a Assistant CC/Track Coach at Catawba College. My son Zach also ran in college, he graduated from UNC Charlotte and was an All Conference Runner there. My wife, Wendy is also a runner, we have been married almost 27 years.

Tell me a little about your injury?
We moved into a new house in June, I went up on the roof to clean some branches off, I guess when I went to step down on ladder, it kicked out from under me, and I knocked myself out. I broke my neck in several places. Doctors added metal plate, two metal rods and 14 screws.

What was the biggest struggle overcoming your injury and getting back to running?
I could not run for two months, I had to let the metal and bone fuse. I convince my Doctor to let me run in Aug, the first 6 weeks, were very rough, very painful and awkward, but I did not mind, I just kept at it, because I knew how lucky I was just to be able to walk, so running again, was a huge blessing. I had no intentions in racing, really have not done many in last 10 years, but I guess I got hooked on training at a high level again, and things started to click, so I decided to try a Marathon, my first one since 2009. My goal coming in was sub 2:40, so I was really happy, how things went. I did have stomach issues at mile 5, so I did not drink anything or take any GU’s during the race, I was scared too.

The Oak Island Marathon (2021), you ran in some tough conditions.  Any advice you’d give someone that was tackling the full marathon course at Oak Island?
I think the course is great and fast, of course the weather this weekend, slowed all of us down a bit, the toughest part was the hill climb around 21, that was very tough, I have never been so happy to see a tent and a turn around point!

What’s one piece of advice you’d give to other runners out there overcoming injuries?
I think the biggest thing for me was to be patient and to remember your “why” on why you run.. Again, I never really planned on racing, but just fell in love with the joy of running again, and being lost in the joy of movement. Just take in the joy of running each day, even when it is not easy, it won’t be, when coming back from injury, just be happy you are moving and know that it will get easier in time. 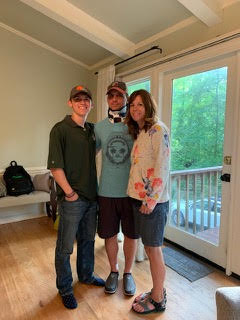 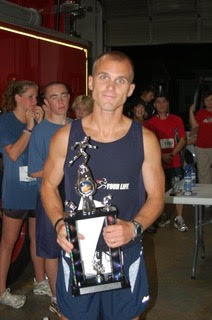 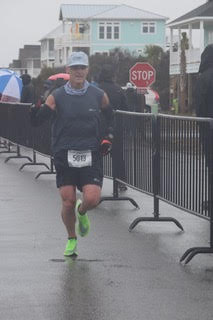