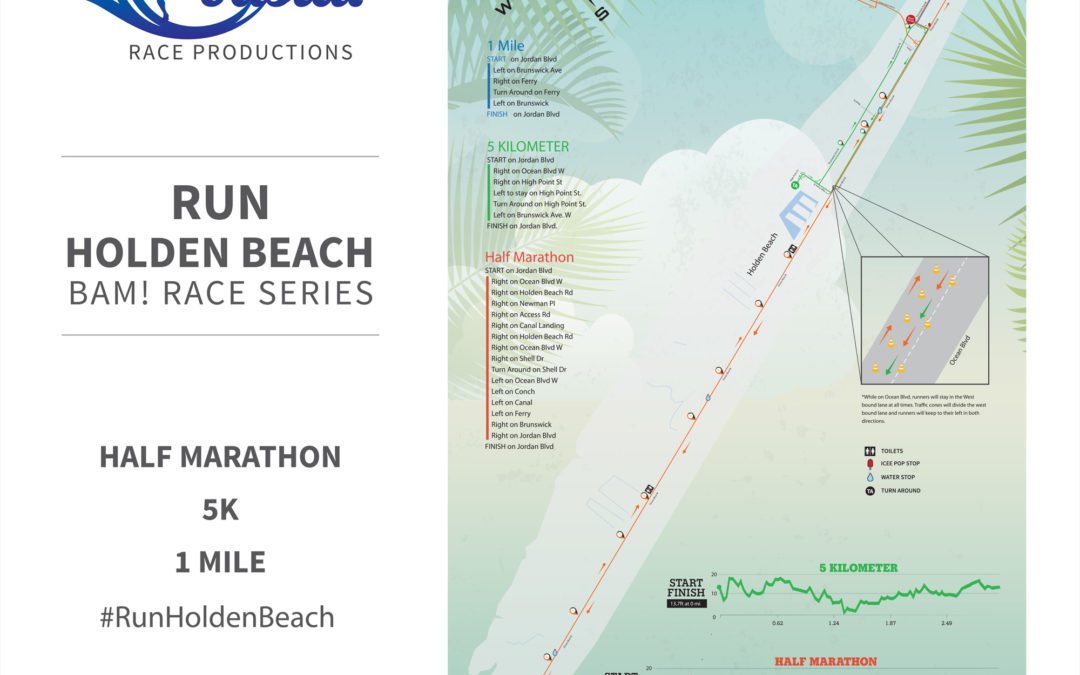 It seems fitting for me to sit down and write about Race Directing since over the next 2 weeks we will be amping up both physically and mentally as we prepare for a sell out crowd September 9th at Run Holden Beach.  While we may refer to this period as  “crunch time”, I assure you hundred’s of hours throughout the year go into planning an event such as this.  An event with lots of moving parts and pieces where you must rely on others to follow through with what they have committed to do – often in a volunteer role.  At times it can be very stressful but at the end of an event I can say it is always worth it.

The Coastal Race Productions team has had some great success’ over that last 4 years. We’ve also learned a lot of valuable lesson along the way.  With a humbled spirit we truly appreciate all of our participants past, present and future.  We would never want to let anyone down and are harder on ourselves than anyone else could be.  One of the biggest things I’ve learned is that it is much easier to register for a race, go run it and then head home – than it is to direct one.  But the rewards of creating finish lines for those desiring accomplishment is something I wouldn’t give up for anything. Giving back to a community of people and a sport that over the last 10 years has given me so much is an honor! We strive to bring great events to an area we’ve grown to love and call home. And while we do love living here we have unique challenges that race directors in other settings do not. Everywhere does – but I’d like to share a few of ours.

We get lot’s of emails and questions regarding different aspects of our races and I thought if I wrote about our process it might help some to realize we are not the only ones involved in the decision making.  For each event there are many steps to go through and we don’t always get our way when it comes to dates, route changes, lane closures and so much more. Everyone gets involved from local Municipalities to the County, State and DOT.  They often have more say in our routes than we do.  One criticism we have received is about our lack of road closures.  Please know safety is very important to us. We are however at the beach and have 1 main thoroughfare on and off most of the islands, and 1 main road leading into the towns.  Government nor Dot will allow for a complete shutdown.  We have had to “share the road” for most all of our races.  What does this mean?  Unless otherwise instructed PLEASE run against traffic and if traffic is coming at you hop to the side of the road!  Believe it or not, one battle we fight is complaints from those who live here year round about our participants not moving over to the side of the road when there is oncoming traffic, or on the islands taking up both lanes of the roadways.  This has become a real battle for us and as we are able to make small strides with getting possible lane closures (we do work on this diligently) we ask that our runners help us out by being mindful of where they are on the roads as well.  Although things might get a little tight along the shoulder or side of the road – we are at the beach where it’s all flat and good!  Just scoot over and keep on running – together we can solve this and move forward!

Another aspect of race directing that I never thought of when I was just running races is all the estimating!  While runners tend to want to sign up closer to the date of a race, we have to order medals and shirts several months in advance.  And all runners want their shirts and medals!  It’s ok – I did too!  Our team has tried to work this a few different ways and honestly it has created a lot of extra work and stress by trying to be over accommodating and still we were unable to please everyone.  So we have decided it’s best for participants and for us to set a cap for each of our events.  We choose this cap on or just before we need to order all of the swag.  Once we reach that number it is a sold out event.  While we do set the number higher than anticipated registrations – we do not buy cheap swag!  Those #bigassmedals are expensive so register earlier because we want you all to run with us and and get our great swag and not email in when it’s full and your upset that you didn’t register earlier!

Beer gardens have also been more challenging in our small coastal communities that deem themselves the “Family Beaches of the East Coast”.  Although we have gotten them approved at a couple of races, it is still an ongoing battle at others.  Just know we are working hard to provide that for you and if we don’t have a beer area at a race it isn’t because we haven’t tried and tried again!  But hey we are still at the coast and if I happened in to a local bar after the race and saw someone wearing their race bib or medal I’d be inclined to buy you a beer or two- Cheers!

Living at the beach has its positives and negatives.  The positives speak for themselves but one of the biggest negatives is trying to rely on the work ethic of others.  We spend more time following up on our follow up and then even more follow up with outside services we contract than almost anything else.  Trying to get people to commit and then being able to count on them is tough living on beach time.  A classic example was a situation with one of the only shuttle companies in our area.  We checked up on them every few weeks and then the week before the race almost every day and certainly the night before.  Not only were they late and one trolly had broke down and they never notified us so we operated 1 short for a large crowd.  That was in May and I swear to this day after leaving at least 20 messages, sending emails and texts we have not heard anything from the owner of that company.  It’s very frustrating and yet race directors take the heat in such a situation.  Bottom line you can prepare and prepare and prepare some more but in Event Planning with so many moving parts you can’t control everything!

One thing I would want everyone to know, wether you are reading this as a participant, administrator or a member of one of the communities, Coastal Race Productions is committed to working through ALL of the tough stuff to make our races bigger and better for all!